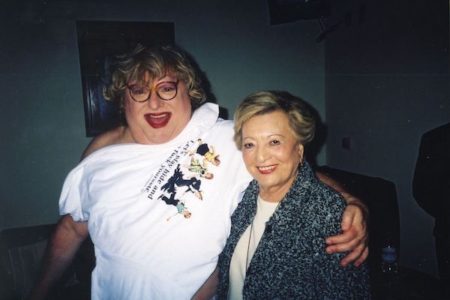 Long before Ellen, Boy George, “Will & Grace,” and RuPaul, there was Bruce Vilanch.  You may know him from writing the most memorable moments on the Academy Awards, or from touring as Edna in “Hairspray,” or from being front and center on “Hollywood Squares,” or from writing for Bette Midler.

No matter how you know him, and even if you don’t know him by name, one thing is certain — Bruce Vilanch always leaves you smiling.

To this gay boy growing up in a Boston suburb, that weirdly wonderful creature who regularly popped up on television brought endless joy – and promise. It proved that somehow, somewhere, there were more people like me; that I could fit in, thrive, work, and more than anything else, have a fabulous time.

It seemed like it was a party wherever Bruce showed up. “Donny & Marie,” “The Brady Bunch Variety Hour,” “The Paul Lynde Halloween Special” and “The Star Wars Holiday Special.”

Was it as much fun as it seemed? Vilanch sighs. “Even sex sometimes isn’t as fabulous on the inside as it seems from the outside!”

He regularly uses his gifts to benefit causes close to his heart. He’s been a tireless advocate for gay rights, raised countless dollars for the fight against AIDS and regularly participates in Pride events – you name it and Bruce has done it. When I ask what drives him, he says, “Renting my body was not an option.”

I remember being part of the invited audience for the dress rehearsal before he hit the road in “Hairspray,” slipping into Edna’s slippers. The first person in his dressing room afterwards was his beloved mother, Henne – who was immortalized in the 1999 documentary about Vilanch, “Get Bruce!” Bruce was still in full makeup (see photo).  Henne gushed, “You were WONDERFUL.”  She turned to me and said, “Isn’t my son wonderful?”  He certainly is!

How long have you been out and who was the hardest person to tell?

I’ve never been in. Before Stonewall, the concept of being publicly out didn’t exist. And I’ve been around since before Stonewall. Shocking, I know. In addition, I was always fooling around with girls, until I realized that any woman I wanted to make a life with deserved more than a guy who would be trolling around looking for other guys. I chose to live an authentic life. When they say homosexuality is a choice, that’s the choice they’re talking about.

If I have to pick just one out of the herd, I guess it would be Noël Coward. He lived the life he wanted to live and nobody seemed to make a bother about it. Plus he was funny as shit.

I am of the Studio One/Rose Tattoo era. I was too late for the Coconut Grove in its prime and now I don’t last as late, so I can’t enjoy Reflex in its prime, which is about 5 a.m.

It’s a thrupple. I’m not sure who the other two guys are, but one of them dresses left and the other dresses right and I’m the centrist.

What non-LGBT issue are you most passionate about?

I’m a tribal Jew, so I’m concerned about my tribe. Working on AIDS-related causes for so many decades has made me more interested in other minority health issues, and being on the board of the LA LGBT Center has certainly gotten me involved in that. Of course, I am dogged about the arts and censorship and preservation and restoration.  And I worry — Tiffany Haddish — she really ready?

What historical outcome would you change?

I try not to indulge in magical thinking. Magical drinking is enough.

What’s been the most memorable pop culture moment of your lifetime?

On what do you insist?

Probably a postcard eulogy of a friend.  They’re thick on the ground now…again.  But this is not because of a plague. This is Mother Nature and Father Time, who are both non-binary.

If your life were a book, what would the title be?

There was a documentary about me called “Get Bruce!” Maybe the book will be “Had Bruce!”  With a much larger cast.

If science discovered a way to change sexual orientation, what would you do?

By that time, I will be married to a Martian.

What do you believe in beyond the physical world?

Xanax. Just when we thought we had climbed the mountain, they moved the mountain. I don’t blame them for being depressed and a bit shell-shocked. Still, our enemies eat a lot of sugar and have boundless energy, and we have to shut down divisive politics amongst ourselves and confront the common orange evil.

What would you walk across hot coals for?

A swimming pool, and in a big hurry.

What LGBT stereotype annoys you most?

Anyone who tells you if you disagree with them, you are worse than Hitler. And that’s an awful lot of gay people. We’re woefully intolerant of each other and rather than finding common ground, we carpet bomb. This isn’t new, but it is especially annoying in the era that began on November 9, 2016.

“Get Bruce!” of course, OK, that wasn’t even nominated for a GLAAD Award, even though part of the movie was my acceptance speech when I personally won a GLAAD Award. Aside from that, I am very partial to an indie drama called “Parting Glances,” which was the first AIDS movie that I can recall. If you don’t think you can handle it, know that the young Steve Buscemi is one of the leads and that alone should get you to Netflix and chill.

What’s the most overrated social custom?

“How are you,”  “Thoughts and prayers,”  “Sorry for your loss,” referring to rich kids as “children of privilege.”

What trophy or prize do you most covet?

That pizza wouldn’t make me happy for more than a minute.