Frequent Oscar writer Bruce Vilanch, in a funny piece in Entertainment Weekly, describes seeing Bjork backstage in her swan dress in 2001, speaking on a cell phone that he couldn’t see. “It looked like she was talking to her swan, speaking Swan. I thought, ‘Wow, she really carries it to new heights.”’ I doubt that anyone will wear anything as exciting as a swan dress this year — there’s nobody truly eccentric nominated, is there? I can’t quite see, you know, Maggie Gyllenhaal or somebody showing up wearing a stuffed animal. Anyway, for Oscar fashion junkies like myself, here’s an L.A. Times article about the how and why a star chooses her particular Oscar attire. There’s a great story of how Marlene Dietrich, in 1951, wore slinky black Dior after confirming that most of the other actresses would be in fluffy pastels (Dior even confirmed whether Dietrich, who was presenting, would enter from stage left or stage right — the better to position a slit in her skirt). You can also read about Vivien Leigh and Gwyneth Paltrow skipping their corsets, and Cher having to sit on the floor of her limo in order to avoid crushing her Bob Mackie headdress — remember, the one she wore because she got a booklet from the Academy telling her “how to dress like a serious actress.” Hmmm . . . Bjork, Cher . . . Mo’Nique? Do the one-named ladies always make a fashion statement? We’ll see. 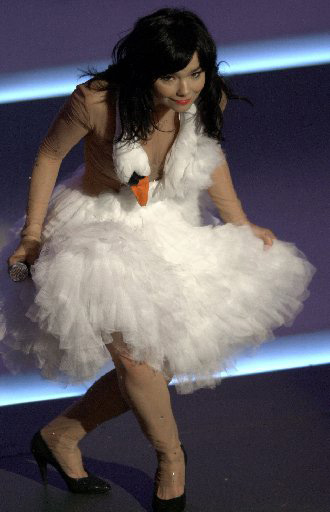 You know, I’d never noticed before that Bjork is wearing very plain, sensible black pumps with this swan dress. Which makes it all the more bizarre. Let’s hope someone channels her this year. (AP Photo)